ThatManILove left early Tuesday morning to go out of town.

And Dex the Wonder Rescue wanted to go outside.

We don’t let him go outside at 4 a.m., because the sprinklers are set for 4 a.m.  And he is more than a little sprinkler crazy.   He’s killed them more than once.  (He’s a little mixed up for a hunting dog.  The closest thing I can get to is that he thinks they sound like a rattlesnake when the water first starts to go through them.  But, I digress.)

So, a little after 5 a.m., when I’m sure the sprinklers have finished their run, I finally acquiesce.

I’m stepping into the shower when I hear this crazy, shrieking, kind of screaming bark.  What’s so funny is that I recognize it.  It’s Dex.  We call it “His Injustice Bark.”

It's the one Dex uses when there is something he wants, really badly, and he just cannot have it.  Or reach it.  Or Zanna just.won’t.give.it.to.him.

That kind of bark.  And we live really close to the neighbors.  Who are going to think somebody might be dying.

And Zanna's not even outside.

Zanna?  Is in the bed under the covers.

I get chill bumps.  The kind that run up the back of your neck.  Then down your arms.

I run inside to get a flashlight.

I grab the flashlight, and head back outside.  I head to the kennel.  Again, I can hear him, he’s rattling the kennel, but I can’t see him.

I shine the light that way.  No Dex.

I shine the light inside the kennel. No Dex.

I can hear him.  And the kennel is shaking like there’s an earthquake.   I think, oh, no – he’s inbetween the kennel and the fence.

And then…something moves to my right.  Right beside my head.

Y’all, our kennel is 8’ tall with the cement footer.

I shine the flashlight up there. I look.  I look again.

DEX IS UP ON TOP OF THE KENNEL.

And all that is on top of the kennel is netting.  And a 60+ lb. German Shorthair.

Needless to say, the kennel is quickly is losing integrity and quickly folding in on itself, because the netting is zip-tied to the sides of the kennel.

I try to get him to the edge of the kennel, but the netting is giving way.

I grab a lawn chair, stand up on it, and try to entice him to the side.

He gets to the side, puts his paws on the bar, and looks down at me, then at the ground.  He looks at me like, “Are you KIDDING ME, MOM????”  and backs away from the edge.

Here he comes again.  I grab his collar.

Then, I think.  Ruh-roh...If he comes right at me, I could really get hurt.  We could both go over in this chair.

Or he could take me down to the ground.

Dex launches off the railing.  He sails over my head.

He lands without incident, trots around my chair, and heads back to the kennel.  I got down from the chair, grabbed his collar, and somehow got him back into the house. 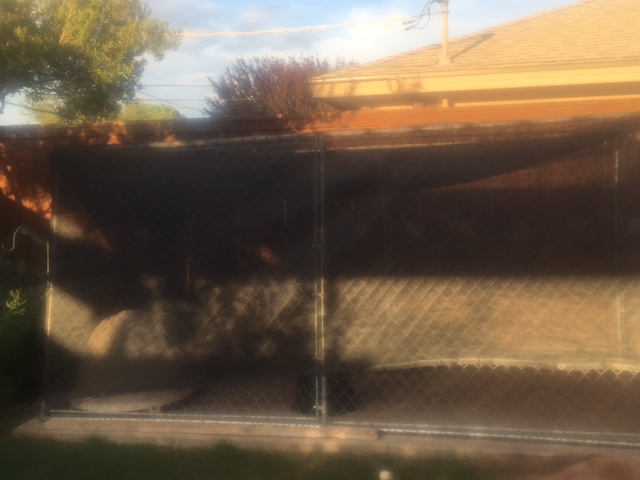 The kennel, though leaning and seriously damaged, is still standing. 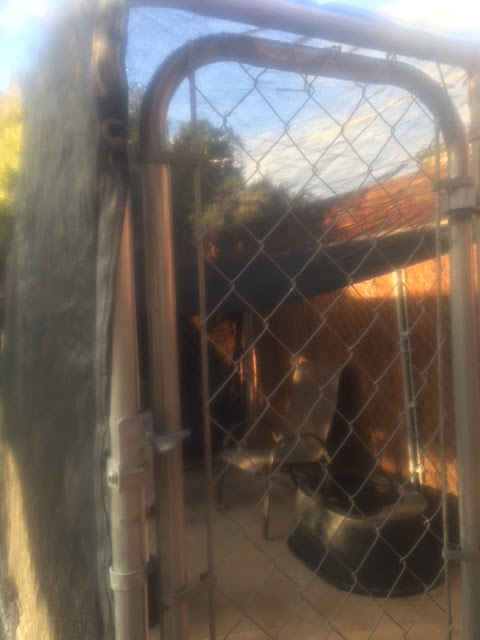 I have zero idea how Dex climbed up there.  He was one small step from walking over the fence to freedom.  One step from getting into the wires that are hooked to the telephone pole.

Y’all want to know what he was barking and yelping about?

Email ThisBlogThis!Share to TwitterShare to FacebookShare to Pinterest
Labels: becauseDEX, Climbing Dogs, Dark, German Shorthairs, How Did He Do That Again, Injustice Bark, Kennel, LizardLizardLizard, Lizards, Never Boring Around Here, Personality Plus, Texas GSP Rescue, Woe Is Me

We landed in Scottsdale, got our luggage, and apped up the Uber dude. (Da Ubahhhh Dude)

Who arrived, post haste, in his 4 door sedan.  Which happened to be a Toyota Camry.

Our luggage?  Not so much.

But, off we went to the Scottsdale Resort, trunk open, luggage threatening to hop out.

The driver was a hoot.

We had so much fun with him.  He even stopped and let us get a flat of water.

He kept trying to tell us he was Texan, and trying to mimic our accents.

But I busted him.  I figured out he was from New York.

He loved that we were messing back with him.

Well, until I told him that we were on Undercover Boss…and that I was the owner of Uber.

He just wasn’t sure if I was telling the truth or lying.  He played along, and did it well.

And we all had fun!

Tip factor?  High.  And he was worth it.

Email ThisBlogThis!Share to TwitterShare to FacebookShare to Pinterest
Labels: Da Ubahhhh, He Is From The South of Bronx, Laughter Is The Best Medicine, ThatManILove, The Luggage Is Falling, Undercover Boss, What Happens In Scottsdale

I have never been so stretched in my life.  And people, I have attended so many trainings and workshops in my profession, it would blow your mind.

If you ever get the chance to attend this convention, no matter your profession or chosen vocation, go.

The speakers were stellar.  Of course, they were gathered together by one of the best of the best, Marcella Vonn Harting, so why wouldn’t that be the case?  She is simply amazing.  Her integrity and diligence in her field is beyond compare.

The topics just…well, I guess the best way to say it is -  my tent posts were stretched.  I think I’ll be digesting all this for a while.

I went to the training this weekend for keys to build business, and came away with keys for personal development, which will most likely translate to building in all facets of my life.

So, if you get a chance to attend this seminar, go.

It is so worth it.

You are worth it.

Email ThisBlogThis!Share to TwitterShare to FacebookShare to Pinterest
Labels: Conscious Language, Do You Know Who You Are, Highest Potential Academy, Look Ahead, Look Inside, Mapping, Planning, What's Holding You Back
Newer Posts Older Posts Home
Subscribe to: Posts (Atom)