I met Rod in February at our company's executive leadership meeting in San Antonio.  I had heard he was the man to know in Alaska.  Rod told me he'd "hook" us up, just to give him the dates and he would introduce us to people in the know regarding fishing, accommodations, etc.
He dang sure did do everything he promised, and more!  We have had such a good time.  Between Rod and his Denise, and Ron & Denise Maddox of Eagle Head Cabins, we couldn’t have asked for a better vacation.  They pretty much slam-dunked the best concierge service we’ve ever had.  And that’s saying a lot, because we are no strangers to five star hotels.

Rod and Denise came and joined us one afternoon at the cabins, bringing their drift boat and equipment.  Rod and ThatManILove grilled supper - Rod grilled salmon he had caught that afternoon, and TMIL grilled tenderloin. Delectable!  It was amazing, and Ron and Denise, the Eagle Head Cabins proprietors, joined us for supper, along with Anna, another coworker of Rod’s and mine.  We had so much fun!  Rod and Denise stayed in one of the cabins, and we were up and about at 4:00 a.m. the next morning. Waders, rain gear, lunches packed, ready to go...and off we went, to the Kenai River to fish for reds.
I was a little hesitant, since I bunged up my left knee (I broke my right knee in the 90’s) but put a brace on it and roped up.
We floated down the Kenai to Rod and Denise’s favorite fishing hole, dropped anchor, and he and Denise began to teach us how to fish for reds.
Now, every day, we learned a different technique - one for halibut, one for King Salmon, and now, this technique for reds.  We were all in the water - I, up to my waist.  The scenery and the river were absolutely beautiful.  The sun would come out, then go back into the clouds, then back out again.  It was a very peaceful, beautiful place.

I could feel the cold, but knew I wasn’t wet - I had on waders!  It was cool.  Until I heard this:  “Oh, s***!”  I looked to my right, and ThatManILove had this look on his face.  I only wondered what had happened for a minute - because he confessed to Rod.
“I broke your rod!” he said.  Rod laughed, gave him another one, and put him back to fishing.  He had snagged his rod, grabbed it higher than the reel, and put undue pressure on it trying to wiggle it loose.  Rod told him the rods had lifetime warranties, that it happened all the time.
I quickly (well, that’s my story, anyway) caught on to the casting, reeling in, recasting, getting unsnagged (I mastered that one without breaking any rods!).  I worked at it for about an hour, and then, I realized I was really cold.
The bank was steep, and due to that knee brace, ThatManILove had to  help me get up the bank.  I was almost all the way up when I slipped...and promptly slid down the bank, on my stomach, right back into the water. Go ahead - you can laugh - I did! I didn’t fall, though, landed on my feet, but I was done with that cold water. I rigged it down, right then and there.
I finally made it into the boat, and couldn’t feel my toes.  I was so cold, but after an hour or so, I started warming up.
Rod, Denise and ThatManILove started catching fish.  Rod let me bring some of them in, it was so much fun!  That “whiiiiirrrrrrr” of the line going out when that fish would run, then the fun of bringing them into the net that Rod was holding.  My new favorite sound.   Oh, my gosh.  You have to try it!!
There is nothing prettier than an angler bringing in a fish, especially if that fish tries to run or fights.  It’s absolutely beautiful, that intricate dance of the angler and the fish.


I've decided that Rod is just as much an expert teacher as he is an expert fisherman.  He spent just as much time helping us and training us as he did fishing, himself.  I hope your first experience fishing is with someone as patient and caring as are Rod and Denise.  They truly want to help you learn to fish, and want you to love the sport as much as they!
Denise got into the boat, and I filmed and took photos.  We had the best time visiting and learning about each other and our families.  Every once in a while, I would shift positions trying to get my knee more comfortable.  I would say, “I feel water running down my leg.”
TMIL:  “Honey, you’re just cold.  I promise, you’re not wet.”
About that time?  He fell.  Those big rocks are s.l.i.c.k., and with the current running fast, it’s easy to lose your balance.
Immediately, he knew water had come into his waders.  And that water?  Is about 40 degrees.  COLD.  Real COLD.
He’s tough, though, he kept fishing.  They fished and they fished until they had their limits.  It was awesome.
We had such a good time, laughing, telling stories, cheering the anglers on - it was yet another amazing moment in our lives.
ThatManILove decided he was really cold, yet all the while, he was telling me “you’re not wet, Janie - you’re just cold.”
We got to the dock, loaded up the boat, and went to get our vehicles.  I stripped out of those waders, and was wet up to my waist. My clothes were simply soaked.  I had been wet for hours.  Evidently, my waders had a leak.  I knew it, but was willing to be wrong! 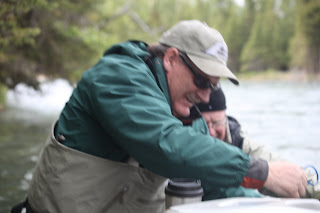 Everybody felt so bad, and I think they decided I was a toughie, going through all that cold for the hours I did!  But you, my faithful readers, know I’m no quitter!
ThatManILove and Rod went into Soldotna to drop off our catch for processing, and Denise and I ran back to the cabin so I could change.  Ran is a relative term.  At one point, I looked down, and I was going almost 80mph.  I told Denise, “Whoa.  I better slow down!  I’m so cold, I was driving like I was in Texas.”
About that time, I looked back, and saw an Alaskan State Trooper coming up behind me, lights flashing.
Hopeful, I pulled over...”Maybe he’s going to pass me!”
Heck, no!  I’m now the lucky recipient of an Alaskan Calling Card -  thank God he reduced the ticket a little bit - over a certain (55) amount, the fines double!  So, I’ll be calling the Kenai judge tomorrow and begging for deferred adjudication or defensive driving - don’t want that bad boy on my record.
We got to the cabin, changed clothes, and met the guys in Soldotna for supper.  We also drove to view Rod and Denise’s beautiful lakefront lot they had purchased on Brown’s Lake.  I’m so excited for them.  It's absolutely breathtaking.
And blessed? ThatManILove and I are so very blessed for that 10 minute introduction Rod and I had in San Antonio - I think ThatManILove and I have gained some new lifetime friends.
So, if you ever get the chance to go fish the Kenai for reds, do so!  It’s worth every minute.  The scenery is beautiful, and the fish - they’re yummy!
Oh, yeah - I forgot to tell you one thing.  ThatManILove ended up breaking yet another rod on this same day.  Rod was so gracious, laughing again, telling TMIL not to worry about it.  I, however, changed TMIL’s name from Salmon Steve to Destructo Steve!


You know the drill - it’s never boring around here!


Rod and Denise - thank you so much for giving your time and resources to ensure we had a great time in your beautiful state.  Thanks for introducing us to Ron and Denise and Anna.  We've truly been blessed by all of you.


Gentle readers - get thyself to Alaska!!  You will so love it there!  And yes...as much as this Texan hates to admit it - Alaska is BIGGER!

Email ThisBlogThis!Share to TwitterShare to FacebookShare to Pinterest
Labels: FishyFishyFishy, Fun Stuff, He's Gonna Kill Me When He Finds Out I Posted This, It's never boring around here, North to Alaska

You know you have SOMETHING to say, so spit it out! I love comments!